A political hub since time immemorial, Delhi has been in the focus of the world for centuries. The ancient city is a blend of old and new. From the narrow streets of Old Delhi to the neatly tree-lined roads of Lutyen’s Delhi, you will be astonished by the various contrasts of Delhi. The city has been the seat of power for many years and it has witnessed the rise and fall of many emperors and kings down the history. It is the melting pot of all the major cultures, traditions, ethnicities and religions of India. So a visit to Delhi gives you a chance to see and experience the rich culture and heritage of India. 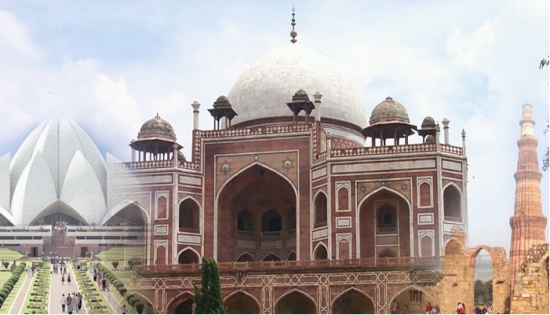 Here is the list of main attractions of the city that you must visit while on your Delhi tour.

It was Built by Shah Jahan when he moved his capital city to Shahjahanabad from Agra. Red fort symbolizes the grandeur of Mughals and shows their system of governance. Different halls meant for royal meetings with public and nobility known as Diwan-e-Aam and Diwan-e-Khas, could be seen here. Rang Mahal is another attraction of the fort which is popular for its numerous lotus-shaped fountains. Red fort is also the venue for independence celebration of India and on every 15th August. Indian flag is hoisted by the prime minister.

It was built wife of Mughal emperor Humayun,   Haji Begum in his memory during the reign of Akbar. Humayun’s tomb is supposedly the first architectural construction of that era. One of its kind during that time, the garden tomb was built on the banks of river Yamuna and next to the shrine of saint Nizamuddin Auliya. It is known for inspiring the architecture of Taj Mahal. It exhibits Persian architecture and has inspired the architectural style of many structures of Mughal era. Humayun’s tomb is listed as UNESCO world heritage site.

It is the highest brick minaret in the world and constructed entirely in red sandstone. The  construction of Qutub Minar was started by Qutub-ud-din Aibak but completed by his successor Iltutmish. The minaret is filled with intricate carvings and Quranic verses. It is believed that minaret used to serve to the mosque next to it and used by muezzin to call for prayers. Qutub Minar is also a world heritage site.

Jama Masjid is the largest mosque in India and built during the reign of Mughal emperor Shah Jahan. It was named after the Friday prayer, Jummah which was done here. The courtyard of the mosque can hold up to 25000 people at a time. It has three huge gates which lead to the courtyard. The north gate houses numerous sacred relic including an antique copy of Quran with deer skin.

A Bahai’ house of worship, Lotus temple was completed in the year 1986 and notable for its flower-like shape. Like all the other Bahai’ temple, it is open to people from all religions. It is also listed as a UNESCO world heritage site.