“Come to the Match Stay for the weekend” is the new cry from the terraces.

The likelyhood, in St Albans, is that if you support a Premier league team, you have to travel quite a way to see them play week in week out. Sometimes you might want to get there and back as quickly as possible, but othertimes wouldn’t it be nice if you could stay over?

Good To See’s Come to The Match, Stay for the Weekend promotion is designed to promote tourism to travelling football fans of Premier League clubs as they travel around the country supporting their teams.

Whether they decide to extend their stay on their own, with mates or bring the family along, football fans are being asked to make the most of their visits.

Here is a selection of current Premier League Clubs and the short break highlights that can turn match day into a full weekend. For some it is a specific attraction, for other’s, like Newcastle’s legendary nightlife, or the beaches around Swansea or Bournemouth, it is all about just enjoying the place rather than dashing home, so that all you need, to turn an away match into a weekend away, is a hotel for the night.

Come To The Match and Stay For the Weekend! 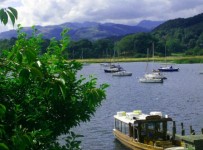