Wicked: The Untold Story of the Witches of Oz, was originally a Broadway Show in the prominent New York theatre circuit, and has now taken the UK by storm; as it has moved into London’s West End theatres. This Wizard of Oz prequel tells the story from the unique perspective of Elphaba, the Wicked Witch of the West, and Glinda, the Good Witch, providing a fresh outlook on this much-loved tale. The UK tour of Wicked commences on 12th September 2013 at its first stop, the Palace Theatre in Manchester. As well as this, a large number of other vibrant cities have also been confirmed as hosts to the show, including Birmingham, Cardiff, Dublin, Glasgow, Leeds and Milton Keynes; but which city does Wicked better? 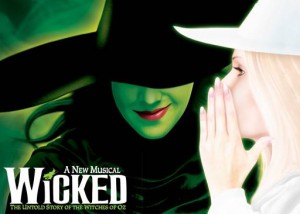 The Birmingham Hippodrome houses this city’s run of the show, and is packed full of all kinds of restaurants and bars; there’s something for everyone here, and the impressive diversity of venues will ensure that nobody goes hungry. Cardiff’s Wales Millennium Centre is a state of the art complex designed with high-profile productions in mind, and is well able to provide a full day’s entertainment before or after a show. The Bord Gáis Energy Theatre in Dublin is Ireland’s largest theatre, with a seating capacity of 2,111, and has been designed to allow the people of Ireland access to large scale productions that would have otherwise been unavailable. The Glasgow production of Wicked can be enjoyed from the King’s Theatre, just moments from the city centre, and the motorway. Leeds Grand Theatre dates from 1878, making it the perfect atmospheric building in which to experience this fantastic production. Although one of the smaller venues on the list, the Milton Keynes Theatre (seating between 900 and 1,400 people) is a well-placed venue well suited for a production of this kind. Hardcore Wicked fans may consider touring these locations and comparing the different flavours of Wicked productions in each of the cities mentioned above, and why not? Make sure to find great deals on UK hotels to help you make the most of your trip!

By far the best production of Wicked is, of course, found in London’s West End. If you’re on the hunt for the best performance of Wicked in UK theatres, there really is no better option than to see the flagship Wicked London show first hand. This show officially opened at the Apollo Victoria Theatre on 27th September 2006 and its tremendous popularity means that is set to run until at least 26th April 2014. The reach and influence of the London Apollo show is difficult to overestimate; changes introduced within this version of the show in order to accommodate British audiences would soon be incorporated into all the productions of Wicked running today. The legendary special effects and technical prowess required to create a show of this kind make it an impressive spectacle, thereby ensuring a good time for all, even if you aren’t a fan of the storyline.

To get yourself in the mood for this epic show, make sure to read all about Wicked the musical in anticipation for seeing the real thing. You’ll certainly not be disappointed whether you choose to attend the famous West End show, or one closer to home!